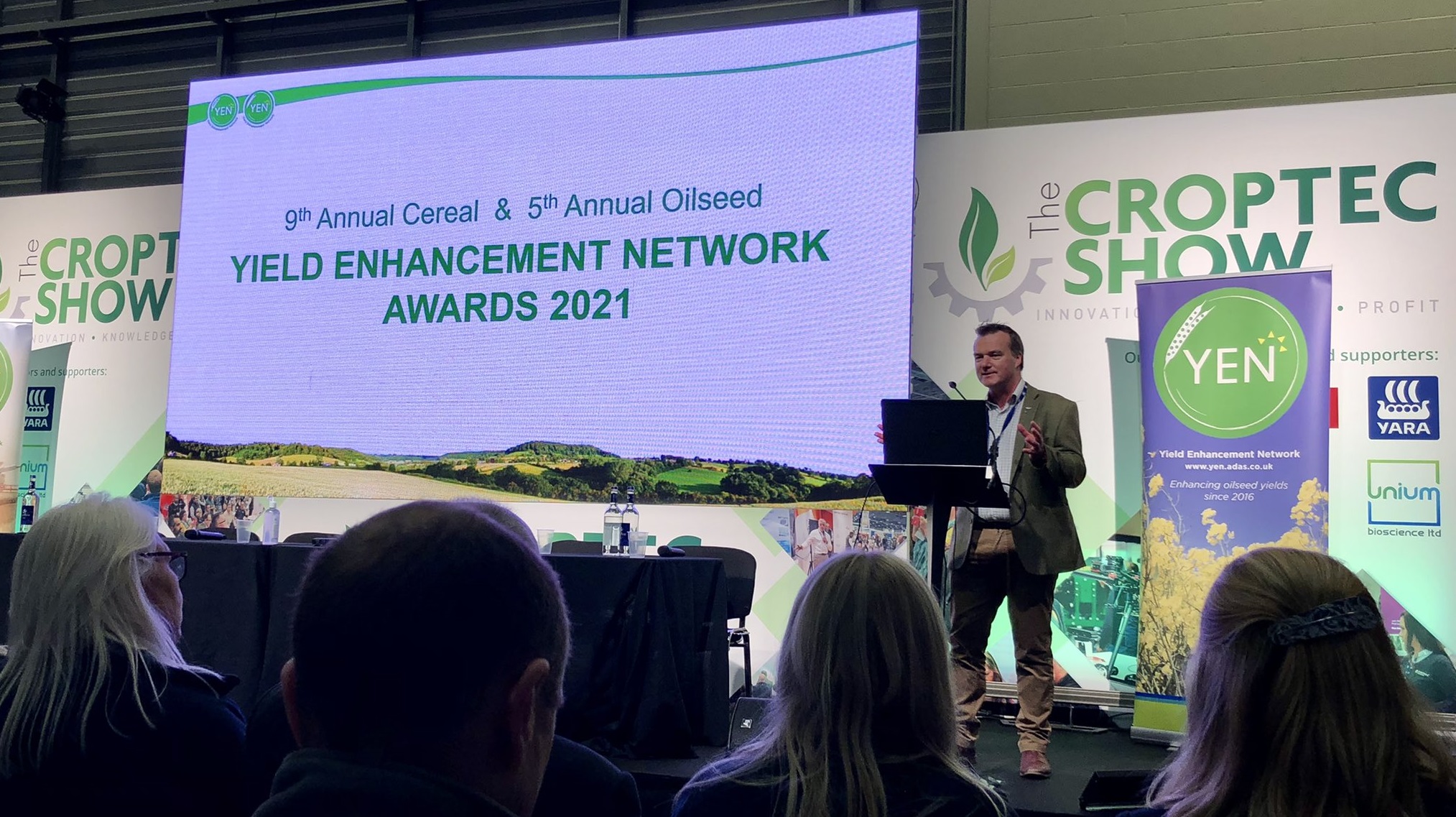 Despite an average growing year for most crops, many growers managed to go above and beyond their predicted max yields, with Lincolnshire grower Tim Lamyman taking the top spots for his wheat yields and his world record breaking winter barley yield.

The highest cereal and oilseed yields achieved at harvest 2021 were announced at this year’s Yield Enhancement Network (YEN) Awards on Wednesday 24th November at the Croptec Show. With award presentations by Tom Bradshaw, Vice President of NFU, 24 farms took home the evening’s top awards for highest yield and highest potential yield achieved for wheat, winter and spring barley, oats, and oilseed. The 2021 winners came from all corners of the UK, as well as from as far afield as Finland and New Zealand.

Familiar names from 2020 made the shortlist once again in 2021. Tim Lamyman from Lincolnshire won Gold, Silver and Bronze Awards for wheat and achieved a world record yield of 14.2 t/ha for winter barley. Aberdeenshire grower and agronomist Iain Learmouth rewrote the grain yield rule book yet again this year, recording an exceptional 107% of his predicted yield. Mark McCallum of Ross-shire and Northern Irish grower Allan Chambers followed very closely behind, going above and beyond expert predictions of their top yield by achieving 107% and 105% respectively.

Oat growers were recognised for the first time with their own separate category of awards. Simon Best from Co. Armagh took home the first ever Oat YEN gold award with Will Hamilton from Berwickshire claiming the silver.

“The YEN is a fantastic example of the farming industry doing its own ‘Action Research’– whilst celebrating and rewarding excellence in cropping, we are leading the way in showing how physical benchmarking and on-farm innovation can be shared by everyone. Over nine harvests YEN has now created an invaluable database (>2,000 yields and >500,000 explanatory observations) for members and sponsors to work out how to grow better crops.”

“YEN wheat crops generally weathered the winter well and produced plenty of heads, but then the dull summer prevented these crops from fulfilling their earlier promise.”

“Winning crops were those that achieved higher than average ear numbers, which we now know are so crucial in creating the storage capacity that barley crops need. Lower yielding crops were clearly impacted significantly by the dry spring which reduced tillering and tiller retention.”

Pete Berry, head of Crop Physiology at ADAS, commenting on oilseed yields in 2020-21, said that

“This season was a lot better than the previous one, but we still had to contend with a wet winter – which we know limits yield potential, followed by late spring frosts and a dull May – which will have limited seed set. So the large number of YEN growers achieving over 5 t/ha is a tremendous achievement.”

Winners’ awards were as follows:

For the Highest Cereal Yield

For the Highest % of Potential Cereal Yield

The YEN particularly seeks to celebrate innovators; in 2021 it gave special recognition through the:

YEN Innovator of the year award, to:

For his high yields, innovative ideas, and use of trials and analysis for yield enhancement.