Peter Chapman of Redbog in Scotland wins the YEN Innovation Award for initiating the Scottish YEN growers group for spring barley and for developing ideas to achieve Crop Momentum.

Peter and his wife Grace farm 1,050 acres at South Redbog in Scotland. The farm is comprised of 850 acres of arable land, and the rest split between temporary and permanent grass, rough grazing and trees. The farm is mainly on sandy clay loam over a clay subsoil which is poorly draining. The arable land is on a fixed five year rotation of Winter Barley, Winter Oilseed Rape, Winter Wheat then two years of Spring Barley. Other enterprises include a small suckler herd of 65 cows, a finishing unit, and four 800 kW  Enercon wind turbines. 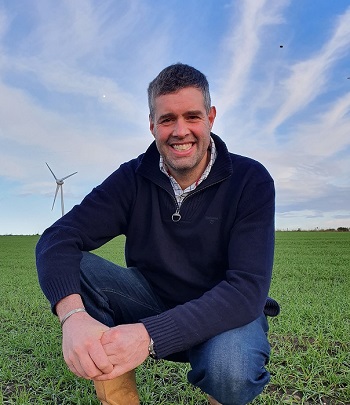 Peter annually treats his arable land with either cattle farm yard manure, compost or chicken litter which he feels has contributed to high organic matter levels (between 7 and 9% across the farm).  Peter feels this is unusually high for a continuous arable system which is ploughed and pressed.

Peter’s farming philosophy is to focus on high use of inputs leading to high output and he believes that precision farming systems have contributed to his high output. He has been using precision farming techniques since 2001.  This has included using GPS soil sampling for lime, P, K and Mg, and yield mapping.  Peter also has been scanning his soils electromagnetically to understand soil type and texture to allow him to develop zoning for all fields for establishment.  From this he can produce variable seed rate maps.  Peter has tried variably applying N from satellite Green Leaf Area maps but he doesn’t think this was particularly successful. This year he has tried some variable rate fungicide/pgr applications from satellite mapping but so far has not had the results back from this.

Peter was awarded the best innovation prize which for initiating the Scottish YEN growers group which has 18 farmers and industry contributors.  The group works together to share knowledge that benefits each of their farming businesses.  Peter feels that the group has been really successful this year with Scottish growers punching above their weight as evidenced by the number of Scottish winners in this year’s YEN competition.  Peter has also supported the formation of the Spring Barley YEN award which reflects the importance of the crop in Scotland.

Peter believes that Dr  Sarah Kendall has been a great ally in the set-up of the malting barley YEN group, and he is hoping to develop a Malting Barley Quality award similar to the NABIM Wheat quality award.

Peter says that YEN has brought him into contact with many like-minded farmers across the UK which has increased his knowledge greatly.  Industry professionals such as Dr Sarah Kendall and Bob Bulmer have provided a greater understanding of components of yield and he thinks that new practices such as trace element provision have slowly but surely led to yield increases across his farm.

According to Peter, the whole initiative is a 'no brainer' to anyone who has a passion for increasing yields on farm and gaining a better understanding of how their crops grow.