The YEN Yield Testing (YYT) project held a workshop for farmers, agronomists, researchers and members of the industry who had been involved in five different Farmer Innovation Groups (FIGs) in the 2018-19 season.

The meeting, which followed on from the Cereal & Oilseed Yield Enhancement Network (YEN) Awards meeting on 19th November at Eastwood Hall in Nottinghamshire, provided an opportunity for each FIG to discuss the results from the trials and share them with other groups. 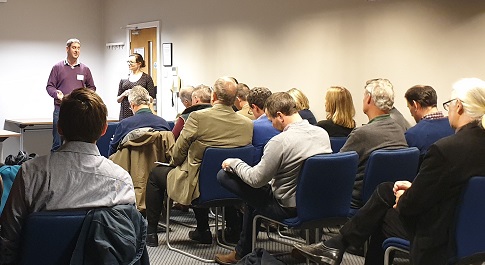 These groups were formed on the basis of ideas formed at an Ideas Lab held in June 2018.

By working in groups the farmers benefitted from being able to share their results across different soil types and regions, whilst also having a first-hand experience of any effects on their own farm.

The farmers who are involved in this project have all been very positive about the FIG approach, which has enabled the trials to address sensible questions, be performed in a robust way, and deliver evidence-based results.

Importantly the YEN Yield Testing Project offers an example of farmer-centric research whereby farmers have been crucial in the co-design approach of the project and within each FIG adds.

David Brightman, the lead farmer of the Spring Potash FIG, is very positive about the fact that YYT brings together scientists and farmers to answer questions

It is absolutely vital that there is a credible scientific hypothesis behind the trials and a genuine attempt to find a scientific explanation for the results. If there is a positive result we need to know when, where and why it works or an awful lot of effort, time, and money could be wasted in situations where it doesn’t work.

The results from the project will we shared at a meeting to be held on 6th February 2020 at the Kettering Conference Centre.

See our Yield Testing webpage for more information on FIGs and how to join.